Welcome to the second half of 2022. What’s up next? As always, your guess is as good as ours. If anything, the past quarter has demonstrated how even familiar shores can shape-shift on us with each tide.

Following are a few of the ways in which the financial landscape has been disorienting us lately. The changeability offers yet another reason to keep your investments immersed in the market’s proverbial ocean, instead of trying to chase its restless waves.

Safe Harbors and Risky Seas: Diversifying your portfolio across stocks and bonds is a bedrock strategy for pursuing the stock market’s higher expected long-term returns, while using bonds as your touchstone for tempering the periodic plummets. Except lately, there have been fewer opportunities for either strong returns or safe harbors. Most stock and bond asset classes have dropped in unusual tandem year to date, as conflicting market forces have been competing for our attention.

Beauties and Beasts: Even within the stock market, some seemingly invincible Wall Street darlings such as Facebook’s parent company Meta (META) and Netflix (NFLX) have stumbled so significantly, they’ve become value stocks. The rapid turning of these tech titans’ tides proves once again, there is no such thing as a sure bet in the stock-picking lottery.

Dollars to Donuts: Despite plenty of challenges at home and abroad, the U.S. dollar has been one of the few assets on the rise lately. As one market analyst, “In real terms, with high inflation, you would expect the dollar to depreciate in the long run—that is what the theory says—but the picture is tricky.” Global investors have been hoarding the stuff lately, perceiving it as a relatively safe harbor compared to other currencies (including cryptocurrency).

In short, there are currently a lot of mixed signals out there, and we haven’t even covered all of them. To see past the immediate confusion, let’s take a wider view:

Relative Scales: Yes, bond returns have steeply declined in reaction to the Federal Reserve’s ambitious rate increases. But while stocks and bonds are both in the red, there’s ample evidence suggesting their overall risk/return roles remain unchanged. For example, citing a 1.2% second quarter loss for its US 1-5 Year Core Bond Index, Morningstar reported, “Bonds with less sensitivity to changes in interest rates held up relatively well.” Compare that to Q2 stock market losses ranging from –9.44% for Morningstar’s value stock index to –25.33% for growth stocks.

Potential Value: Speaking of value stocks, they’ve also held up relatively well compared to growth stocks and remain underpriced in 2022. This bodes well for investors who are committed to maintaining a long-term tilt toward value stocks. As AQR’s Cliff Asness observed in a Wall Street Journal (WSJ) interview, “People like me, both for legal and for honesty reasons, should never use the word guarantee, and I won’t. … But I’ve never been more excited about value.”

Sudden Moves: Underperforming asset classes often surge surprisingly, just when we’re most convinced they never will. For example, a WSJ quarter-end analysis looked at the two most recent years in which the S&P 500 lost more in the first half of the year than the 21% it’s dropped this year to date. That was in 1962 and 1970, and both times, the market rebounded in the second half of the year by 15% and 27%, respectively. This by no means suggests we should expect the same in 2022, but neither does it negate the plausible possibilities.

Historical Perspective: Take a look at any chart that tracks stock market growth over time, or compares its periodic downturns to its stronger growth spurts. These visuals illustrate why we encourage you to remain as fully invested, but as widely and globally diversified as possible. No investment strategy will shield you from every sling and arrow the market throws our way. But we believe our approach best positions you to seize the remarkable recoveries as they occur, while avoiding a measure of the near-term volatility along the way.

From our view, any other tactic seems less likely to optimize your financial bottom line. That said, those who do try to get ahead by reacting to recent events can at least know they’re helping big banks and brokerages thrive. As one reporter recently observed: “Banks make money on the way up and on the way down through trading desks that work the connections between buyers and sellers. JPMorgan Chase & Co. and Citigroup Inc. both expect the second quarter to be among their best ever for trading revenue.”

Whose best interests would you rather serve: your own or your broker’s? Assuming it’s your own, we’re right there with you. Please let us know if we can answer any questions about current market conditions, or anything else that may be on your mind.

Reminder to get your quarterly Credit Report from:   Equifax

The table below shows the returns through June 30, 2022, for selected investment asset classes. In most cases, the results below are appropriate benchmarks for the related mutual funds in your investment portfolio. 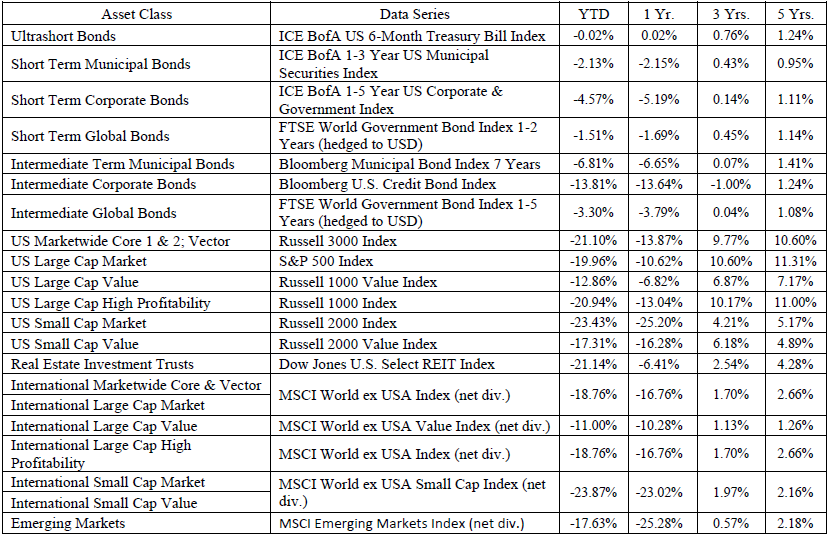