The Department Of Labor (DOL) Fiduciary rule, which has been addressed here previously has gone into effect, but the ultimate future of the rule remains mired in the political crosswinds. Whether the rule is retained or not is only of minor consequence at this point. The rule is deeply flawed in that it only addresses certain "accounts" and doesn't address other "accounts". Most consumers have no clue as to the subtleties of how the rule may or may not apply. The rule does not really clarify the underlying relationship between client and advisor.

That said, the promulgation of the DOL Fiduciary rule put the issue of Fiduciary on the front burner in a big way. That will not change, regardless of what happens with the rule itself. So, in my opinion, the good from the DOL rule has been pretty fully absorbed into the market. That bell will not be un- rung.

CFP Board - It's about time.

Now the CFP Board has finally taken up the Fiduciary issue in earnest. In the prior version of the Code of Conduct, the CFP Board left a truck-sized loophole in the fiduciary requirement:

The new rule is more direct and more comprehensive: A CFP® professional must at all times act as a fiduciary when providing Financial Advice to a Client, and therefore, act in the best interest of the Client.

Under the new proposed standard, some specifics of the fiduciary duty are set forth, including the Duty of Loyalty, the Duty of Care, and the Duty to Follow Client instructions. Gone is the "material elements of financial planning" dodge, which, I'll wager, not one in a million consumers is aware of and understands.

Also the applicability of the Fiduciary Duty under the new proposed rule is expanded to Financial Advice, which is a great deal broader than Financial Planning. The term "Financial Advice" is also defined in some detail in an inclusion mode, and provides exceptions for marketing materials, educational materials and general communications under a "reasonable person" standard.

It occurs to me that a good deal of damage can be done with marketing materials, however, it seems it will be difficult to get that variable annuity sold without stepping into the Financial Advice realm, and thereby being held to the Fiduciary Standard.

In summary, this is a good step forward, and it is about time. People who engage a CFP® professional for financial advice, ought to be able to depend on the fact that the CFP® professional is acting as a Fiduciary. No ifs, no ands, no buts.

Note that this a proposed rule change at the CFP Board, and after a public comment period, the Board will consider adoption of the rule.

State of Nevada – a footnote

Separately, the State of Nevada has extended an existing fiduciary rule formerly applicable only to financial planners to now apply to broker-dealers and registered investment advisors. The Nevada rule inexplicably fails to include insurance agents.

The idea of state-by-state adoption of Fiduciary standards for Financial Advisors has some appeal. Note that the CFP Board action will impact only a fraction of the holders of the CFP marks, since a certain number of CFP professionals already operate under a Fiduciary standard for other reasons. And the number of holders of the CFP marks is relatively small in relation to the total number of people holding themselves out as Financial Advisors or some such. The state-by-state solution would fix that problem, but as indicated by the Nevada example, would end up a patchwork of applicability (e.g. Nevada excludes insurance agents from the rule).

Our firm has been nothing but Fiduciary since day one. We would like to see a universal standard for all financial advice that looks something like this:

If you hold yourself out as a financial advisor or some such, and you engage the trust of the person or entity receiving your advice, you are held to the standard of a fiduciary.

Last month at the shareholders meeting, Matt Elliott was nominated and unanimously elected to be the CEO of this firm. This is the next natural step in the transition planning and transition work we have been doing for the last several years. Throughout this process, Matt has demonstrated his capacity at each level and preparedness for the next. I've seen Matt bring a new leadership to the organization that is refreshing and innovative. While this is, and has been, the occasional challenge for me, I could not be more personally delighted that we have brought the firm to this point.

Further, we plan to enter into a transaction this fall that will result in Matt owning a majority interest in the firm. I will remain as a substantial minority shareholder after the transaction.

As for my part, my intention is to continue with the firm for the foreseeable future. The design of our transition is that I will have more flexibility to focus on the things I particularly enjoy: spending more time with my wife Kathleen, meeting with clients, and continuing to work to raise the bar for the firm.

The table below shows the returns through June 30, 2017 for selected investment asset classes. In most cases, the results below are appropriate benchmarks for the related mutual funds in your investment portfolio. 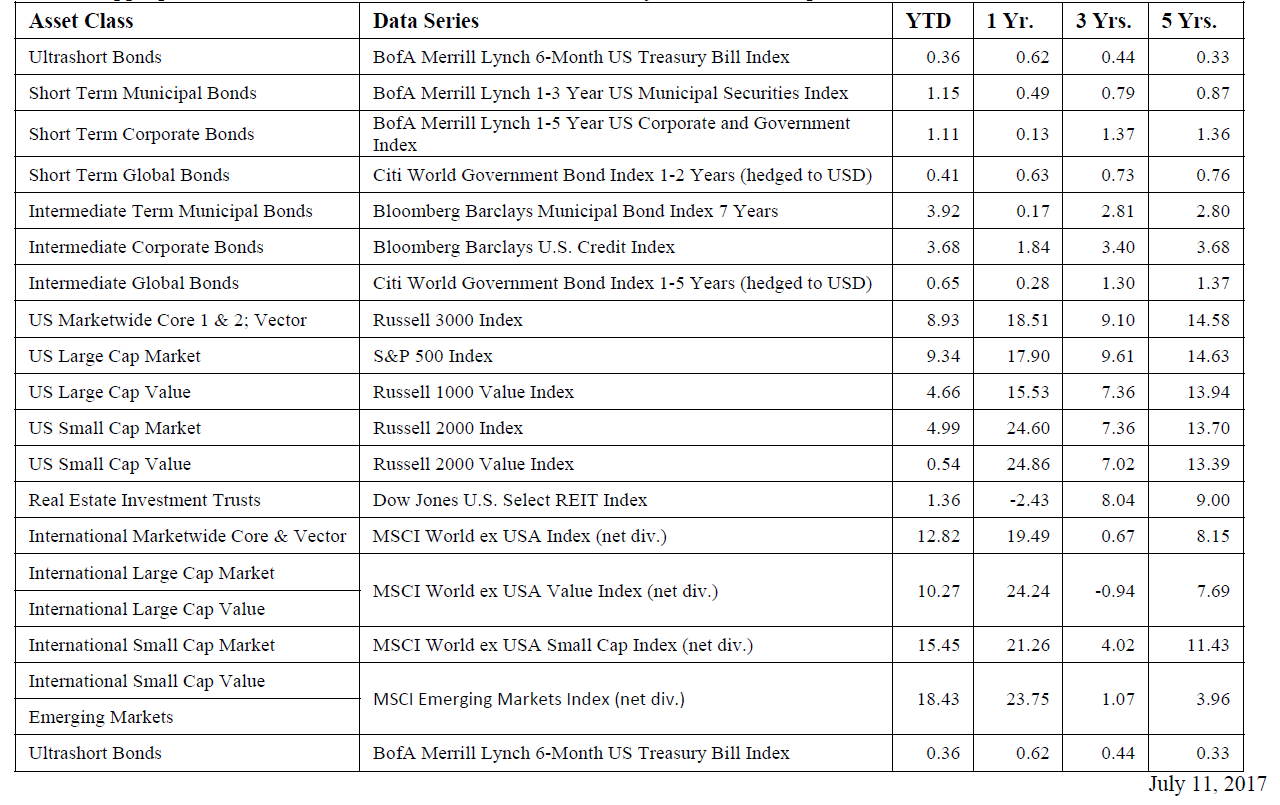